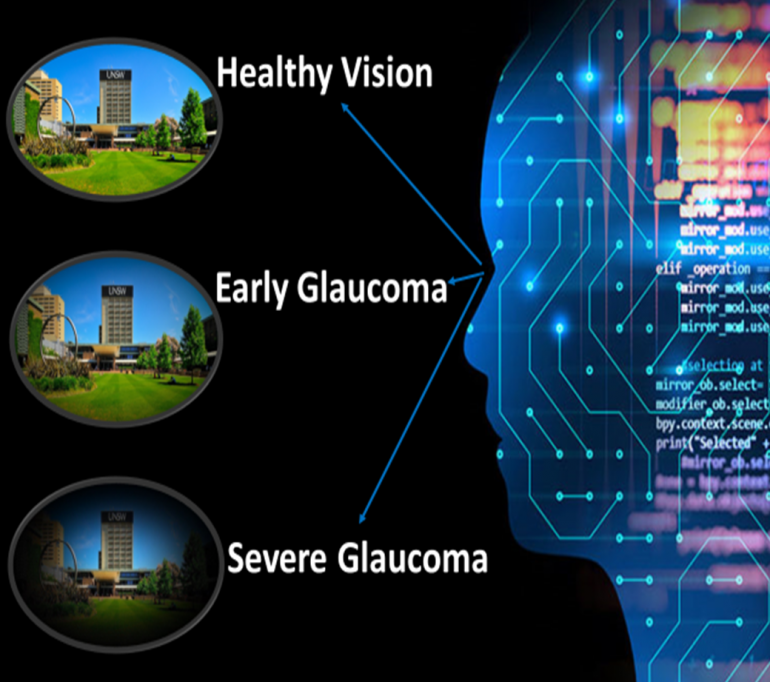 Ocular diseases like age-related macular degeneration, retinopathy of prematurity and diabetic retinopathy have well-defined lesions – which are visible on fundus photography and other face techniques such as image analysis, and AI spaces are well established. But for glaucoma, at both detection and progression stages, the diagnosis process does not depend only on one or two features but combining several parameters.

“Among different eye diseases, glaucoma is a complex, multifactorial and one of the leading causes of blindness. Detection at an early stage becomes a clinical demand and is challenging for AI”, says Dr Maitreyee Roy, a lead researcher of the AI team of the Optical Imaging and Visualization (OIV) Lab, School of Optometry and Vision Science at UNSW Sydney.

Glaucoma is a progressive optic-neuropathy and 3.4% of people aged between 40 and 80 are currently suspected of this disease. It is estimated that around 112 million could be affected in the world by the year 2040, according to Glaucoma Australia. The advent of AI technology will be a paradigm shift from the present method in practice, if it can prominently identify glaucoma, and evaluate the progressive structural and functional changes. This early detection will help with preventing visual loss and provides a long-term accurate diagnosis.

In AI, machine learning – mainly deep learning – has become very popular for its automated segmentation, interpretation, and classification of disease based on image processing algorithms from fundus photographs, optical coherence tomography (OCT) and visual fields. AI has shown its promising performance in classifying 2D images for distinguishing noticeable changes occurring in glaucoma, such as enlarged cup-disc ratio. However, a challenge remains regarding reaching the performance of expert clinicians in a real-world clinical pathway with three-dimensional diagnostic scans that can assist in separating the disease from normal ageing.

The current study of the OIV lab entitled “A Feature Agnostic Based Glaucoma Diagnosis from OCT Images with Deep Learning Technique” showed how glaucoma can be differentiated from healthy eyes through a trained deep learning algorithm using raw OCT images of peripapillary retinal scans of optic nerve head.

Dr Roy and her PhD student Mrs Nahida Akter demonstrated how their AI model can be used to detect and classify glaucoma from early to severe stages, in a press release presented at the Academy 2019, Orlando, USA. The study accumulated maximum glaucoma diagnostic features including both functional and structural features to train the machine learning algorithm and the outcomes of the study revealed 97% accuracy, which is much better than the previous studies of AI in glaucoma.

Though the machine learning results are promising for glaucoma detection and classification, further data collection is needed to train the algorithm with a large dimension of clinical data to make the AI independent, regardless of different scanning devices and ethnicity. The final AI model will also set for a real-world trial in a glaucoma clinic to validate the outcomes and make the AI clinically trustworthy – aiming to surpass the performance of clinicians in real-life situations.