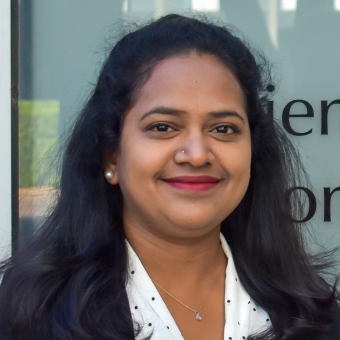 Traumatic Brain Injury (TBI) is defined as traumatically induced structural brain damage caused by an external force resulting in physiological disruption of brain functions. It is a serious public health problem due to its acute and chronic debilitating consequences. It often leads to a myriad of social, emotional, cognitive and sensorimotor deficits. The first line of assessment often includes testing of neuropsychological functions which is time-consuming, influenced by educational, and cultural and background, and are not sensitive to detect subtle deficits in TBI. Neuroimaging techniques such as CT/MRI are expensive, need expertise and often fail to detect diffuse axonal injuries - the signature injury in TBI. Hence, there is a need for an objective, cost-effective and sensitive biomarker to detect and monitor TBI.

Deficits in saccadic and smooth-pursuit eye movements are often present in TBI owing to the vulnerability of the complex oculomotor circuitry in the frontal and parietal lobes – commonly affected areas of brain in TBI. Eye tracking technology provides an objective, non-invasive and sensitive tool. to evaluate reflexive, anti-, memory-guided, and self-paced saccades as well as smooth-pursuits. In addition, these unique protocols allow the evaluation of cognitive deficits along with the eye movements.

The results of our meta-analysis demonstrated voluntary eye movements such as antisaccades, memory-guided saccades and smooth-pursuits were more adversely affected in TBI than reflexive and self-paced saccades. Unlike reflexive saccades, these eye movement tasks involve higher cognitive load such as response-inhibition, working-memory and visuo-spatial information processing which are affected in TBI. Hence, it is unclear whether these oculomotor deficits are due to the difficulty in disengaging attention and/or working-memory load or difficulty in planning and execution of saccades. The aim of our study is to investigate the role of attention and working memory in antisaccades, memory-guided saccades and remembered antisaccade paradigms with different delays.

Revathy Mani is a PhD candidate at the School of Optometry and Vision Science, UNSW, Sydney. Her area of research is to understand the relationship of visual, oculomotor and cognitive deficits in Traumatic Brain Injury. She received her Bachelors (2002) and MPhil degree (2011) in Optometry from Elite School of Optometry, affiliated to Birla Institute of Technology and Science(BITS), Pilani India. She joined Sankara Nethralaya (SN), a tertiary eye care centre in India in 2002 as an Optometrist. She was the Head of Department of Binocular Vision and Vision Therapy (2009-2016). She is a Fellow of the Neuro-optometric Rehabilitation Association, USA (2018). She is the recipient of the 2019 William C Ezell Fellowship Award from American Academy of Optometry Foundation.

Recipient of travel grant for the annual meeting of 2019 American Academy of Optometry and 2020 ARVO.

HDR student representative for the Faculty of Science Research Committee for 2018.

Association of Research for Vision and Ophthalmology