Grabbing the Flash: some new illusions of movement 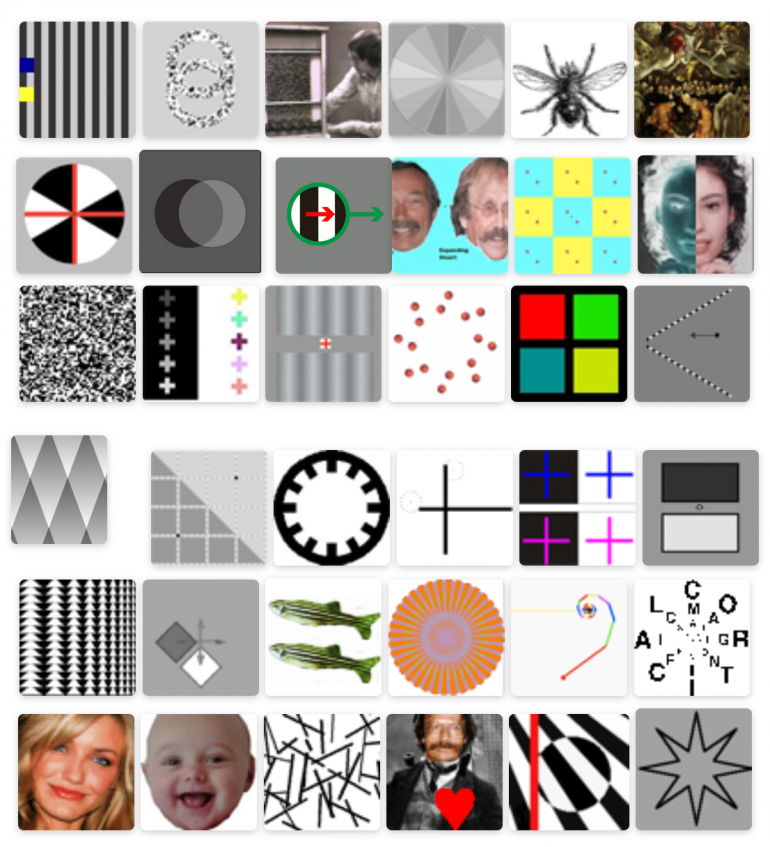 Where are objects perceived?  It depends upon their context.  We have found that a moving background can change the circular orbit of a flying bug, making it look larger or smaller, or even looking like a horizontal or vertical line. In our flash-grab illusion, moving backgrounds can also massively alter the perceived size and shape of flashed targets.   Moving frames strongly affect dot organization (Johansson) and motion direction (the Duncker illusion). In both cases, the direction of motion is altered. We’ve also found that a moving frame also dramatically shifts the perceived positions of dots flashed within it. Specifically, when participants are asked to judge the absolute locations of flashed dots, they tend to report the relative dot locations within the frame, as if the frame were almost stationary.  Older observers are often simply unable to point to the location of a stationary target that is flashed against a moving background.  These effects can be seen with a moving “frame” consisting of just two dots. These “flash-grab” illusions throw light on how position and motion are coded by the visual system.

Dr. Stuart Anstis was born in England and was a scholar at Winchester and at Corpus Christi College, Cambridge. He took his Ph.D. at Cambridge with Prof. Richard Gregory. He has taught at the University of Bristol, UK, and at York University, Toronto, Canada. Since 1991 he has taught at the University of California, San Diego (UCSD). He has been a visiting scientist at the Smith-Kettlewell Institute, San Francisco, the San Francisco Exploratorium, and at IPRI in Japan. He has published about 120 papers on visual perception, including the perception of real and apparent motion, Pulfrich's Pendulum, movement aftereffects, contingent aftereffects, coloured afterimages, normal and defective colour vision in babies, adaptation to gradual change in luminance, and the apparent size of holes felt with the tongue. Has also worked on hearing, including adaptation to frequency-shifted auditory feedback, hearing with the hands, adaptation to gradual change in loudness, and perfect pitch; and on motor aftereffects after jogging on a treadmill. With George Mather and Frans Verstraten he edited a book on the motion aftereffect. He has given over 250 invited presentations on his research throughout the USA, Europe and Japan, including an invited address in the President's Symposium at the annual meeting of the Society for Neurosciences a few years back and the 1998 Max Wertheimer Lecture in Frankfurt. His work has been featured in Discover magazine (June 1993) and in occasional television programs. He has won awards as an outstanding teacher at York University and at Earl Warren College, UCSD, where he was invited to give the commencement speech to 8000 people at the graduation ceremony in June 1999.  He is a Humboldt Fellow, a visiting Fellow at Pembtoke College, Oxford, and a recipient of the Kurt Koffka Medal for outstanding contributions to vision science. He now lives in Del Mar, California.