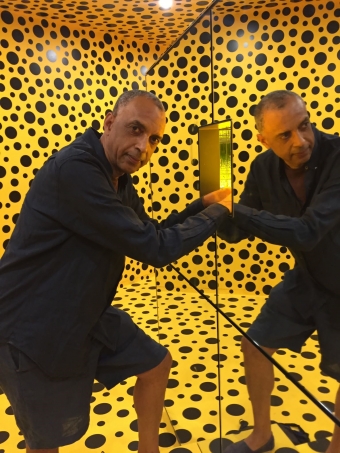 I’m probably unusual among optometrists in that optometry wasn’t my first choice as a career. Actually, it wasn’t my second choice either! When I left school, I went to Birmingham University (UK), to study physics but it didn’t take long after graduation to realise that I wasn’t exactly a recruiter’s dream. Fifty-odd job applications and not a single bite was a pretty damning sample, so at the urging of my Dad, I began work with one of his friends, who was a Chartered Accountant. He was a lovely man and I am grateful to him for giving me a try, but after six months, I knew it wasn’t for me and so I left. The experience wasn’t totally wasted though, I can still do your books if you run a fish and chip shop or a newsagency!

It was in a casual conversation with an old uni mate that the subject of optometry as a career came up and after a stimulating conversation with my own optometrist, it quickly formed itself into a career pathway. I still didn’t have it quite right though. In my mind, after completing training at the University of Manchester (UMIST) I would get my own practice, play golf a couple of times a week and that would be a nice life. What changed was that a year or so after I qualified, my boss at the time taught a contact lens clinic at the university. One day, he had another appointment and asked if I could cover for him. Of course, that was that! He never did it again and I was sucked into a teaching rôle and commenced a research Masters at the university. Incidentally, one of my fellow students at this point was our former Head of School, Scientia Professor Fiona Stapleton.

After leaving UMIST I had a couple of research positions in the contact lens industry before Professor Brien Holden came calling, with the offer of a job in Australia. Sure I thought, that’d be nice for a couple of years…and here I still am, nearly 30 years later.

The role I took on back then was as Director of Clinical Research in the Cornea & Contact Lens Research Unit, a position which included responsibility for a new project called SEE3. This was the collaboration that resulted in the invention and commercial development of silicone hydrogel contact lenses, which are now the most widely prescribed modality in the world. In fact, it wasn’t until after the bulk of work on silicone hydrogels had been completed that I embarked on a PhD. I was very much a latecomer in that respect and indeed, almost managed to talk myself out of it, for one reason or another. Fortunately, after some excellent encouragement from two very respected sources, namely Professor Dan O’Leary, who was Head of School at the time and Professor Des Fonn from Waterloo in Canada, I did decide to enrol and thoroughly enjoyed it from that moment on. Undoubtedly it was the right thing to do, for a number of reasons, but one very important thing was that it gave me the confidence to say, “I don’t understand”. If I had been more able to do that as an undergraduate, I might have been a better physicist.

The pathway after graduation led me through several roles until I became Executive Director of Research & Development at the Vision CRC, in which what is now the Brien Holden Vision Institute (BHVI), was a major participant. In collaboration with industrial partners, these organisations were responsible for several successful contact lens products and began the work that has since resulted in the development of myopia control technology.

Throughout my career I always maintained close links with the School of Optometry and Vision Science, through appointment as a visiting academic, and so when I left BHVI, it was a natural step to take up a Professorship in the School. This allowed me to continue to contribute to research and teaching and especially to postgraduate education.

It has been a great delight to see some of my former students become successful academics, researchers and teachers in our School, as well as elsewhere and in industry.