The alarming rise in anti-microbial drug resistance poses a major global health risk. Since their introduction in the 1940s we have grown accustomed to being able to treat infections with antibiotics.

The alarming rise in anti-microbial drug resistance poses a major global health risk. Since their introduction in the 1940s we have grown accustomed to being able to treat infections with antibiotics.  This situation is changing rapidly as bacterial infections resistant to multiple antibiotics become more common.  Some bacteria now carry genetically encoded resistance to every available clinically useful antibiotic and there is no way to effectively treat infections caused by these pathogens.  The ground-breaking O’Neill report estimates that if antimicrobial drug resistance is not tackled, and no new drugs are found, that by 2050 antibiotic resistant infections will result in 10 million deaths per year with an expected cost to global economies of up to US$100 trillion.

In July this year the NUW alliance hosted a workshop to promote the creation of a joint Antimicrobial Research Taskforce (NUW-ART) involving academics from UON, UNSW and UOW.  Investigators with expertise in antibiotic discovery and screening, researching the mechanism of antibiotic activity, and rational modification and development of compounds as effective new drug leads from all three universities attended the NUW-alliance funded workshop held at NewSpace on 16-17 July.  Also in attendance was Prof Bob Hancock from UBC, Canada, one of the world’s leading experts on antibiotic resistance, discovery and development, as well as Dr Mark Blaskovich (UQ) who runs the open access antimicrobial screening program CO-ADD.

At the conclusion of the workshop there was a commitment from all attendees to collectively work on the development of approaches to combat a particularly problematic area of antibiotic resistance, biofilms.  In many situations, such as on implanted medical devices, bacteria will congregate into structures called biofilms that help to protect them from environmental stresses, including antibiotics.  This is particularly worrying as bacteria in a biofilm can be ~1000 times more resistant to a drug than genetically identical free-living bacteria.  If biofilms can be prevented from forming it is likely that infections could be much easier to treat.

NUW-ART attendees are now initiating collaborative projects to address the problems of antibiotic resistance and biofilms that have the potential to provide effective new compounds to treat recalcitrant, life-threatening infections. 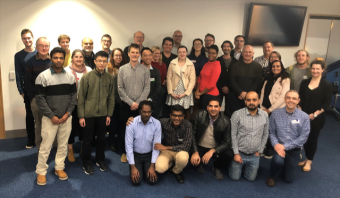